In the race for renewable energy, solar is gaining ground on wind generation, which currently holds a lead over solar. In its July “Short-term energy outlook,” the U.S. Energy Information Administration (EIA) estimates that next year, additional solar capacity coming online will exceed additional wind capacity for the first time, the EIA reports.

Most new photovoltaic installations will include one or more PV inverters, whose job is to extract as much DC power as possible from solar panels and convert it to AC at high efficiency. PV-panel ratings range from about 60 VDC at 250 W for a module to about 600 VDC at 20,000 W for a PV array. 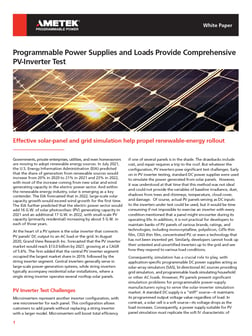 A PV inverter’s first step is to locate the maximum power point (MPP) on the IV curve of the PV source to which its input is connected, and it must continue to perform maximum-power-point tracking (MPPT) to remain on the MPP as irradiance conditions change (due to variable cloud conditions, for example).

An effective and practical way to test inverters involves surrounding them with instruments that can simulate a PV panel, the utility grid, or a residential load. A power supply used as a PV panel simulator must support high MPPT accuracy—it must closely match the IV curve of the panel it is simulating and have a fast response time. It must also minimize phase error—an indication of the deviation of a PV simulator from the ideal response. A real solar panel has negligible phase error, and to enable precision measurements, a simulator’s error should be less than 15°. As the MPPT algorithm’s frequency increases, the simulator’s phase error increases, and as a result so does the measurement error when attempting to evaluate an inverter’s MPPT efficiency. When the error approaches ±90°, an inverter under test could actually begin seeking the MPP in the wrong direction, leading to instability.

AMETEK Programmable Power has an extensive history in solar-array simulation, having developed the ability to simulate satellite solar panels in 1991. The company’s terrestrial solar-array simulator is the Elgar TerraSAS ETS Series, developed in conjunction with Sandia National Laboratories, as described in the paper “PV Array Simulator Development and Validation,” which can be downloaded at the TerraSAS product page at powerandtest.com.

Power supplies used in the TerraSAS are based on high-speed power topologies that differ from the company’s standard products, where output capacitance has been minimized and other speed-enhancing changes have been made, resulting in a tenfold or better speed improvement.

TerraSAS power supplies with 600-V and 1000-V ratings are available in 5-kW, 10-kW, and 15-kW versions. 60-V, 80-V, and 150-V at 850-W versions are available for testing the latest generation microinverters and DC power optimizers; the latter can boost efficiency in multi-panel arrays in which one or more panels experiences reduced levels of illuminance compared with the others. The addition of a linear regulation output stage on the 850-W version boosts its bandwidth to 30 kHz.

Power supplies in TerraSAS simulators can be easily connected in parallel to scale output power up to handle microinverters, string inverters, and even utility-scale inverters. Many models can also be connected in series to handle higher voltage tests.

AMETEK Programmable Power also offers products that connect to the inverter under test’s output, including the California Instruments RS/MX Series AC and DC regenerative, bidirectional power sources for grid simulation. The RS/MX Series can simulate utility anomalies including phase loss, voltage dips and interruptions, and frequency disturbances. And finally, the California Instruments 3091LD Series can simulate residential and other loads. Unlike resistive load banks, the electronic load can simulate real-world worst-case operating conditions such as the high crest factors resulting from the proliferation of switching power supplies in consumer electronics and home appliances.

To learn more about how to apply the TerraSAS solar-array simulator, the RS/MX series supplies, and the 3091LD Series electronic loads to PV inverter test, see the company's new white paper, Programmable Power Supplies and Loads Provide Comprehensive PV-Inverter Test. It provides a look at a solar-power growth forecast and the market for PV inverters, and it offers details on how you can address the test challenges posed by the proliferation of solar inverters.

Get the white paper today to learn how to surround your PV inverter with simulation instruments to ensure optimum performance and standards compliance.